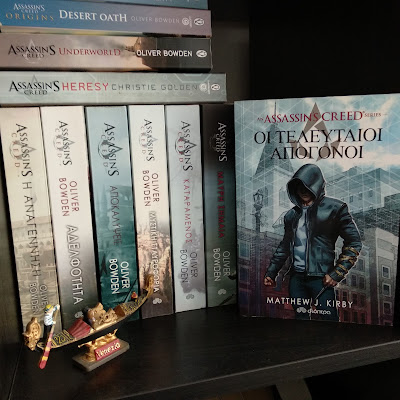 Today we are talking about Last Descendants (Assassin's Creed  Last Descendants #1) by Matthew J. Kirby .
It is set in the Assassin's Creed universe that I love which is why I picked it up in the first pace.
It was a good book but I didn't enjoyed it as much as the other Assassin's Creed books. The story was good and it was executed good enough but my main problem was the fact tat the majority  of the story took place in the present and not in the past, as I am used to by the other books. I prefer the Assassin's Creed books I read to be entirely in the past and not mentioning Abstergo and Animus at all.
That said I will continue with series.
Rating : 3 Stars
Synopsis from Goodreads
Nothing in Owen’s life has been right since his father died in prison, accused of a crime Owen is certain he didn't commit. Monroe, the IT guy at school, might finally bring Owen the means to clear his father’s name by letting him use an Animus—a device that lets users explore the genetic memories buried within their own DNA. The experience brings Owen more than he bargained for. During a simulation, Owen uncovers the existence of an ancient and powerful relic long considered legend—the Trident of Eden. Now two secret organizations will stop at nothing to take possession of this artifact—the Brotherhood of Assassins and the Templar Order. It soon becomes clear to Owen that the only way to save himself is to find the Trident first.
Under the guidance of Monroe, Owen and a group of other teenagers go into a memory they all share within their DNA: the 1863 Draft Riots in New York City. Owen and his companions will find themselves tested on the gritty streets of New York, and their experiences in the past will have far-reaching consequences in the present.
See you in the next post and don't forget to keep reading!!!
Athina
You can buy this book from Book Depository using this link (affiliate link)
Athina στις 13:00
Share