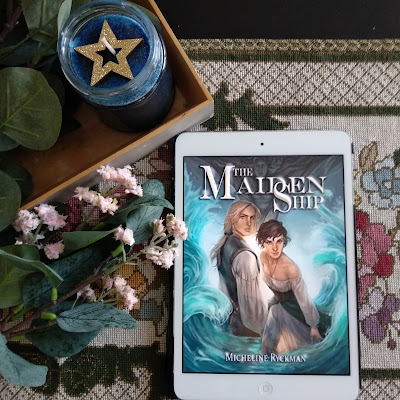 Today we are reviewing The Maiden Ship by Micheline Ryckman (aka @whimsicalillustration). This is the first book in her YA fantasy series The Maiden Ship and it was published on February 2020 by Whimsical Publishing.

I finally read The Maiden Ship and I am in love with it. I love everything about it, the story, the setting, the magic system and of course the characters. Micheline's writing is magical and I enjoyed every bit of it.

The story is about Dain Alloway who was only nine years old when he began a new life with his father, sailing aboard The Maiden. Eight years later, the aristocratic city-boy turned merchant-sailor feels like he lives with one foot on land, and one foot in the sea. Life floats smoothly by until the night he wakes to find a mysterious woman in his cabin.
The events that unfold after her appearance transform Dain's world. Now, hunted by empty-faced demons, he finds himself thrown into a dangerous web of intrigue and magic. As the crisis grows, the young sailor discovers powerful gifts buried deep within, talents that might shift the tide of a centuries-old war. Whether or not he's ready, Dain will have to risk it all for the salvation and freedom of those he loves.
The story had the action it needed and the necessary character development. Dain is an amazing protagonist. He is sensitive but also strong and determined. But the secondary characters are great as well. Sable and Mo were among my favourites.
The ending of the book was a little unexpected and left my with many questions and now all I want to do is know more. Thankfully, thanks to Micheline, I have an eARC for the next one, The Lion of the Sea which I will read asap.
Rating: 5 Stars
The Lion of the Sea, the next book in the series releases on February 7th 2021 and you can preorder it now.

Micheline is a wonderful creator. She is an incredible artist and a great writer as well. Check out her books and her art on her website: https://whimsicalpublishing.ca/
See you in the next post and don't forget to keep reading!!!
Athina
Athina στις 08:00
Share